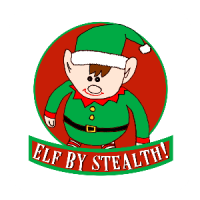 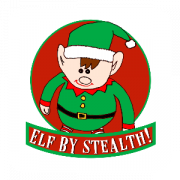 What Does Santa Do When It’s Not Christmas?

It’s a question we’ve been asked many times before, after all, as Santa’s helpers, we’re the ones who know him best! But everybody seems to want to know what Santa does when it’s not Christmas.

While it’s easy to think of Santa’s job as an easy one – he only works on Christmas Eve(!), this is actually not true. Santa’s work takes a lot of time and preparation, so, for most of the year, he is studying patterns and trends and deciding which toys to start producing as well as managing a very large work force of elves.

Of course Santa is not as busy throughout the whole year as he is in December, but there is still plenty of work to be done to keep things in tip top shape and have everything in order for his one, extremely busy, night of the year.

Below we’ve broken down the types of tasks Santa needs to do or organize, and roughly when they occur each year.

What Does Santa Do All Year? 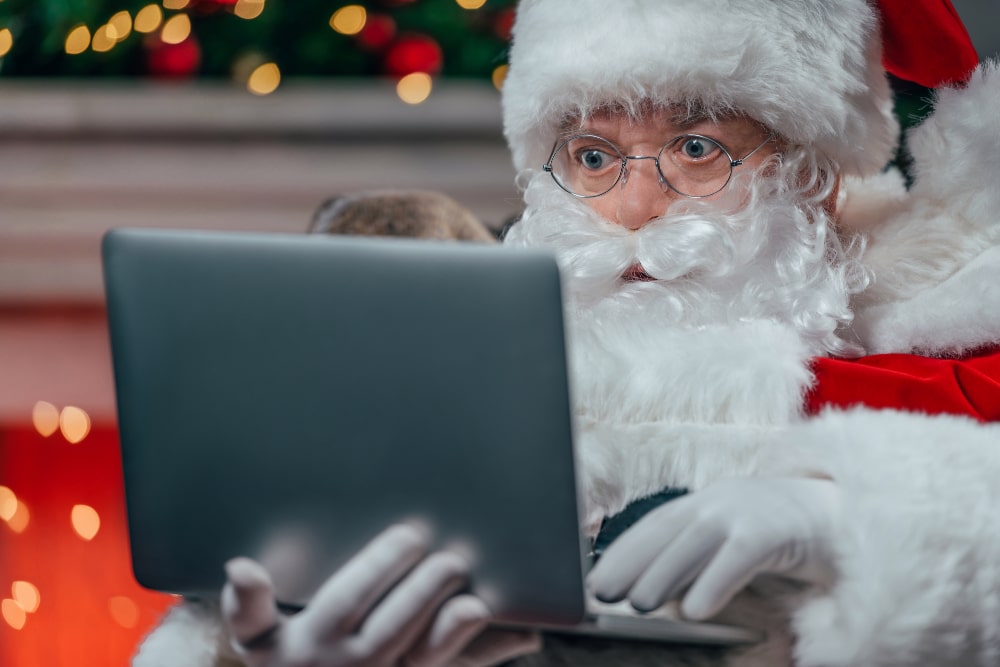 So, what does Santa do all year? Let’s break it down month by month to show you how he fills in his time.

Having just finished his busiest time of year, Santa likes to have some time off in January. He usually heads somewhere warm, in the southern hemisphere, like Australia, South Africa or Indonesia.

After some rest and relaxation he returns home to the North Pole and starts preparing his lists and spreadsheets for the year ahead.

Santa’s February days are spent doing general maintenance with the elves. He helps and organizes any repair work that needs to be done on his house, the elves’ houses and the reindeer’s stables.

Due to the harsh conditions of the North Pole, it’s important that anything exposed to the elements is treated to a coat of paint to protect it. Of course Santa has many helpers (us elves) to help with these tasks, but he always helps when he can.

Most of March is spent in his office. Santa collects data from all over the world and analyses the trends of children’s likes and dislikes, as well as children’s behavior and what is acceptable and what is not.

A child that was considered ‘bad’ 100 years ago might not be considered bad in this day and age. It’s important that Santa is kept well informed about the sentiments of people around the world so that he can make informed decisions at Christmas time.

April is spent a lot like March, although Santa will also have to start ordering materials to make the toys.

Sometimes it takes a month or two for the necessary materials to reach the North Pole, so Santa needs to allow for this to make sure he has everything needed for when toy production starts in June.

By May Santa needs to have a pretty good idea of how many and what sort of toys he and the elves will need to start producing. He spends a lot of time on his computer looking at charts and graphs.

Toy production starts in June! The North Pole really comes to life in June as our busy season has begun. Santa will have allocated all of us elves to whichever tasks he requires us to do, and then he oversees and troubleshoots with us as production begins.

Santa usually takes a short break in July. He leaves us elves to continue with the toy production and he takes himself, and Mrs Claus, off to somewhere in the Northern Hemisphere for a little summer holiday. This is his last break before the really busy season begins for us all in the North Pole.

Santa also takes an interest in any Christmas in July celebrations going on around the world, and has been known to drop in on some of these events occasionally.

Santa will be back from his break and straight back into helping and overseeing the toy production factories.

Usually there is a backlog of things for him to address, any problems we elves have encountered while he was away. He helps us to solve any problems we’re having and just generally manages toy production operations.

September is a big month for us elves as we have the September Elf Ball! It’s a fun party that gives us all a chance to eat nice food, dance, sing and have some fun with one another.

Santa, of course, is the figurehead of the ball and always our number 1 ticket holder! The September Elf Ball is almost like our own Christmas celebration that we celebrate before we get too busy with our Christmas prep.

By October at least one of the factories will have stopped toy production so that it can be swapped over to being a wrapping station. Santa oversees the work rosters and puts the best wrappers on wrapping duty.

It’s also about this time of year that Santa really starts working on his famous list. So, top tip, Santa is watching from October onwards! He can’t keep tabs on everybody in December, so he has to spread some of his intel and fact finding missions out.

A lot of time in November is spent working on the list – like we said, he simply can’t do it all in December. It’s not only a naughty and nice list though, Santa is also keeping track of children’s likes and interests and trying to decide which gifts would be best for which child.

The reindeer are also in increased training mode by November and have extra health checks and any changes made to their diet that will help them with their very long flight on December 24th. Santa also organizes any surveillance elves and runs classes for them so they know what to do once they get sent to people’s homes on December 1st.

We probably don’t even have to tell you what Santa does in December! Everything that needs to be done! Up until the 24th it’s all systems go from all of us here in the North Pole.

There is a lot of list checking, gift wrapping and even some last minute toy production to make sure everything is ready for Christmas Eve. He also has meetings with surveillance elves when necessary if they have important information to report.

On the morning of the 24th, Santa holds a celebratory breakfast that we all attend to celebrate all of the hard work that we’ve done. Then the sleigh is loaded and the reindeers are attached.

Santa’s journey actually begins at around 12 noon our time (North Pole time) as New Zealand (Santa’s first stop) is 12 hours ahead of us in time. So if he leaves here around 12 noon, he arrives in New Zealand just after midnight, when all the children are asleep in their beds.

Santa then continues flying through the night, all over the world, making sure that he arrives in each country in the right time zone. It’s a very long night for Santa.

When Santa gets home from his journey he goes to bed. We don’t see him for 24 hours or so while he recovers from his jetlag.

The last week of December, between Christmas and New Year, we make sure all of the necessary maintenance is done on the sleigh and just tidy up any loose ends we need to in order to make sure we have a smooth transition into next year’s preparations.

Of course it’s not all work in that week, in fact most of us take a well earned break and just rest, hang out with friends, go fishing or read books.

Sometimes we even set up a moonlight cinema and watch some of the latest releases that Santa has been able to get in for us – we especially like any Christmas movies with elves in them!

What Does Santa Do In The Summer? 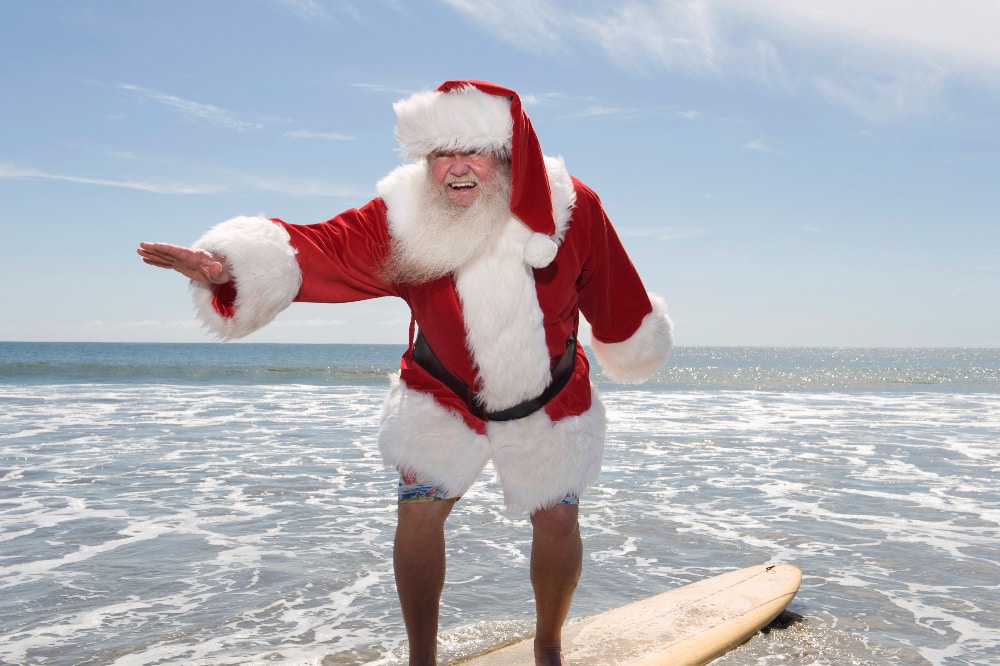 In the North Pole, we don’t really have a summer as such. Technically, yes, it’s summer from June To August, but the weather, while warmer than in winter, is still only around 32℉ or around 0℃ – so it’s still freezing!

Santa does like to spend some of his time off doing a spot of ice fishing but, to really have a summer break, Santa spends a week or two in the southern hemisphere in January and then a week or so in the northern hemisphere in July. That way he gets to experience two summer holidays in the year.

The rest of the time he is kept busy with all of the work we’ve written about above.

What Does Santa Do Before Christmas? 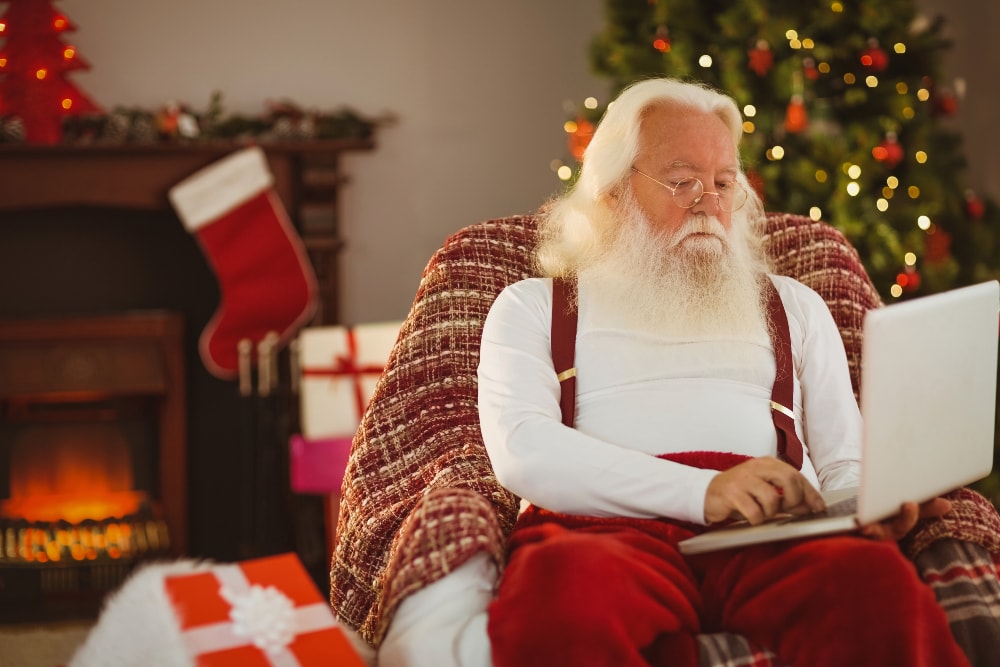 Before Christmas is a very busy time for Santa (and us elves). The planning and preparation for Christmas really goes on all year long, but the business end of the season is December for Santa.

He spends most of December checking his lists and making sure the sleigh and reindeers are in good working order. He also checks in at the wrapping stations and oversees any last minute toy production that needs to happen if a particular toy has really taken off in popularity.

He also spends time reading through all of the letters he receives and updating his spreadsheets to make sure they reflect what everybody wants to get for Christmas.

He has a special breakfast on the morning of Christmas Eve when we all get together and celebrate our hard work then help him to load up the sleigh and send him off on his mission.

What Does Santa Do After Christmas? 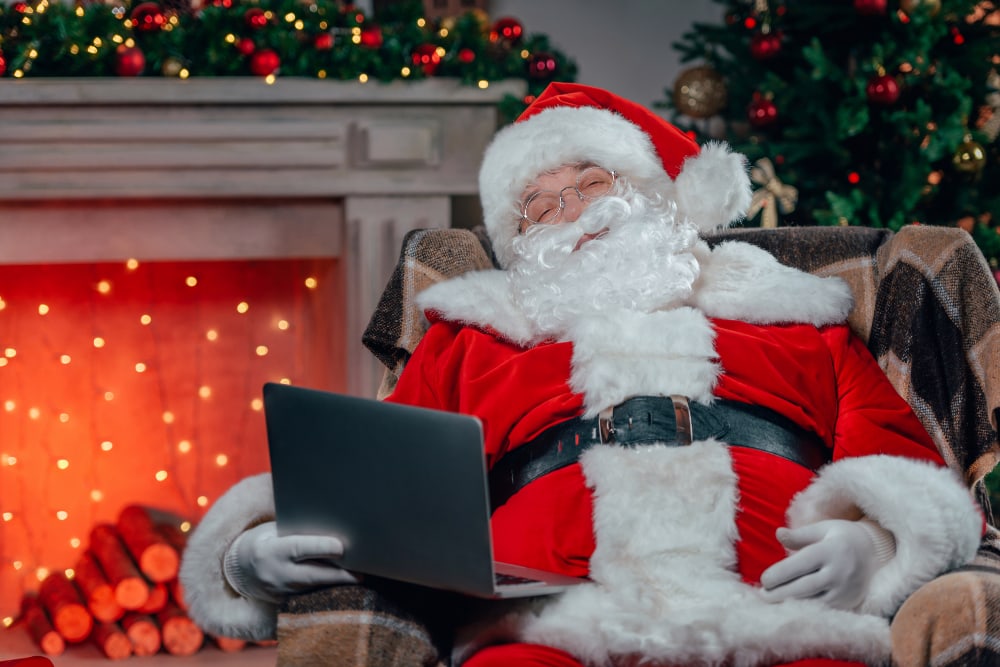 After Christmas Santa sleeps! We don’t see him for about 24 hours while he recovers from the jetlag and the long night of traveling.

When he’s up and about again we help him to give the sleigh a good clean before it goes back into storage then we all have a bit of a break from our regular duties.

Santa and Mrs Claus also get packed and organized for their January summer holiday that they take down in the southern hemisphere. 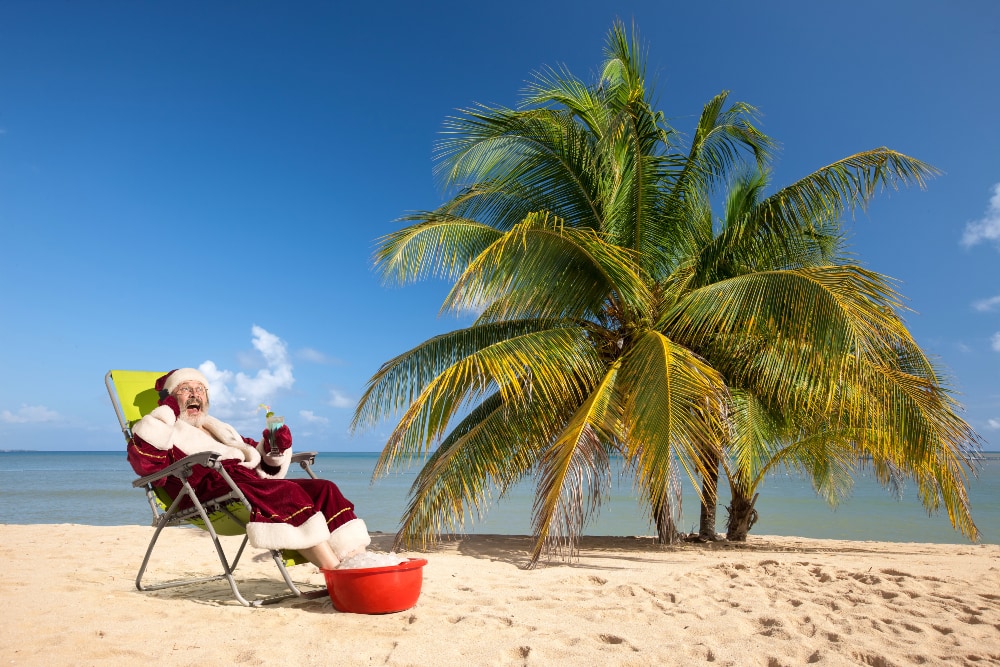 Many people wonder what Santa gets up to when it’s not Christmas. As we’ve explained here, Christmas is a full time job for Santa. It takes all year to get everything ready for that one special night of deliveries.

Have you any idea how many children there are in the world who celebrate Christmas? Imagine having to make and wrap presents for each of them – it takes a lot of time and organization!

Luckily Santa has this skill down to a fine art now, as well as a lot of help from his team of Christmas elves, which is why Christmas comes and goes each year without a hitch – it’s pretty amazing, right?!

PrevPrevious ArticleWhere Did Christmas In July Come From?
Next ArticleSecret Santa For HalloweenNext 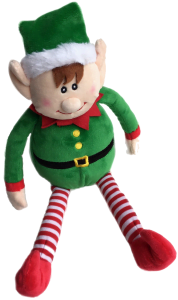 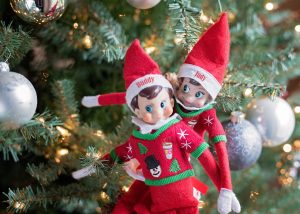 So, what’s a good name for an elf? If you’ve been lucky enough to receive an 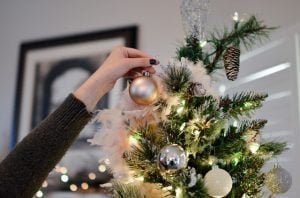 Stuck for Christmas tree decorating theme ideas? We’re here to help!Christmas is the most wonderful time 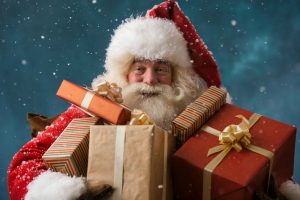 What Is A Dirty Santa Gift Exchange?

A dirty Santa gift exchange can be a delightful way to add something new and exciting for the holidays! There is plenty of scheming, planning, and… 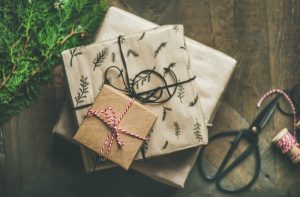 What Is A Pollyanna Gift Exchange?

Christmas is a time of happiness, warmth, kindness and it’s also a great time of year to remember that we all need to extend love and kindness… 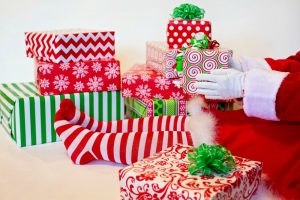 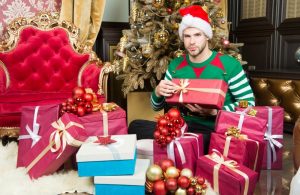 Elf Outfits For Adults – How To Dress Like An Elf

Want to dress like an elf this Christmas season, but stuck for outfit ideas? We’re here

We are a participant in the Amazon Services LLC Associates Program, an affiliate advertising program designed to provide a means for us to earn fees by linking to Amazon.com and affiliated sites.